From Classic to Contemporary - Choices are Good!

April 25, 2017
NO CONTRACTS YESTERDAY- ONLY ONE SO FAR TODAY

There were a small handful of truly new inventory yesterday, and a few others that we will have to look at again for another season....we'll start with the new:

102 North Street - $4,600,000
This is my husband's boyhood home - a classic CT home.  The sellers restored it, maintained it's footprint, flooring and millwork. They added a garage that is architecturally in-keeping with the home itself. It's on nearly an acre relatively close to town, and beautifully sited to capture great light and a warm feeling throughout the home.
150 Clapboard Ridge Rd - $5,495,000
Sellers just bought this in 2014 for $4,063,000 and renovated it.
51 Connecticut Ave - #3,895,000
Beautiful new construction in central Greenwich - priced nicely to
compete with other in town properties.
275 N Maple Ave - $2,995,000
Renovated with a chic urban aesthetic this year. Located in town on .86 acres
This should have no problem getting close to asking price.
22 Griffith Rd - Riverside - $1,395,000
4 bedrooms 2/1 baths - sellers bought it in 2001 for $755,000
It's blessed with the Riverside factor

Can Someone Make an Offer on these Already? 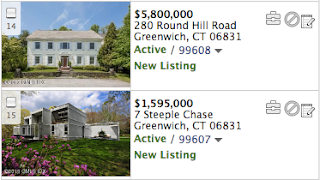