November 16, 2010
OK - so the entrepreneur, Michael de Jong for MEKA luxury modular  homes was after publicity when he placed one of his  "homes"  temporarily in the West Village in NYC. He did achieve the desired result and actually presented a tour to hollywood producer John Kilik and artist Julian Schnable. Schnable  lives a block away from the Charles street location of MEKA's pop up home, and is friend with producer Kilik. This one is made from a shipping container and took about 5 days to assemble on site. 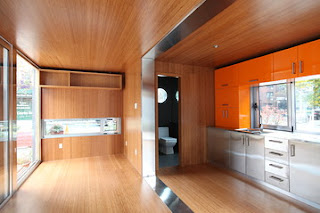 The company formed a year ago, and is based in Toronto. The homes are built for $24K in an eastern Chinese seaport of Ningbo. So far, MEKA has only sold 10 units, mostly in Canada.

While I don't see this as a trend per se, the idea of using sustainable products in new buildings, and the aesthetic are appealing factors for the next wave of home buyers.

Sexy sells - and it's not your parent's house.

Shame that he does not have a website - that is certainly not consistent with his generation. So branding is not his strength.